MINDSpeed is a research project that aims to promote graceful and dignified aging by facilitating the consumption of brain-healthy foods and the playing of mentally-stimulating games. On this project, I joined a UX team that had already done preliminary research to dicover the users (adults 65 and older) as well as their eating and device usage habits. Each member of the team contributed design ideas and interactive prototypes which we critiqued and tested with users to discover the right blend. Following this, I built a web application to implement the ideas that worked best for our users.

The research also revealed that MINDSpeed had to be super simple to use because older adults have no patience for complicated workflows, use familiar metaphors, appear friendly, and be approachable.

I started off with some quick sketching to get ideas out of my head. In doing so, I played around with creating a schedule of meals for each week that the users would build. Also, they would be challenged with balancing a weekly budget against getting a certain number of "brain points." 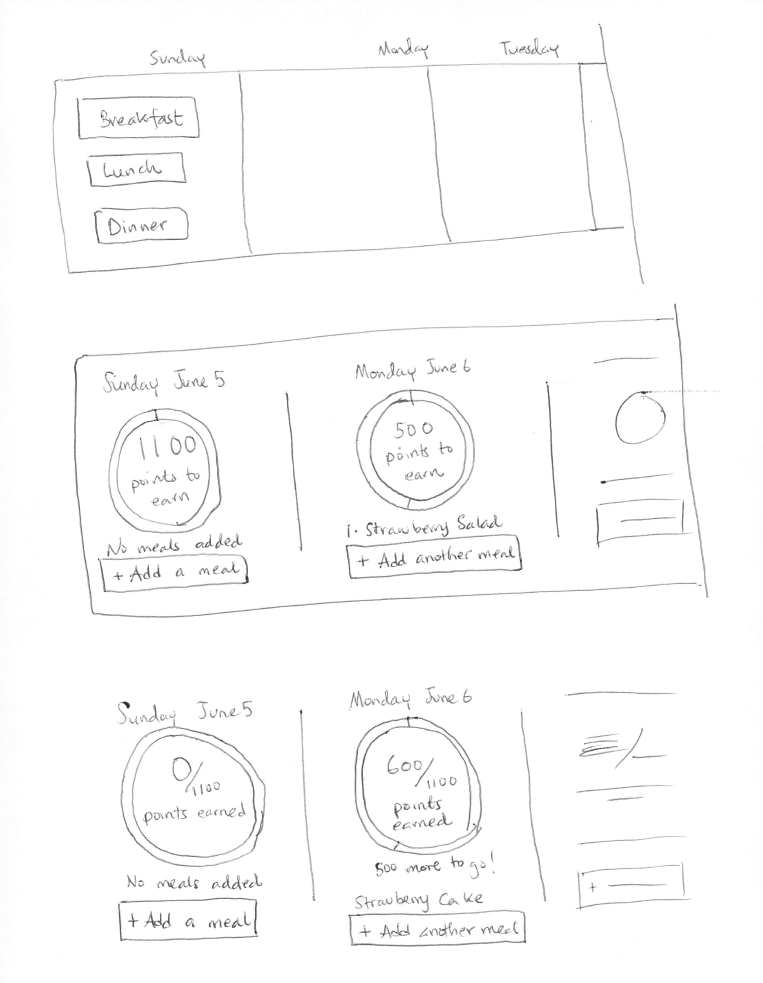 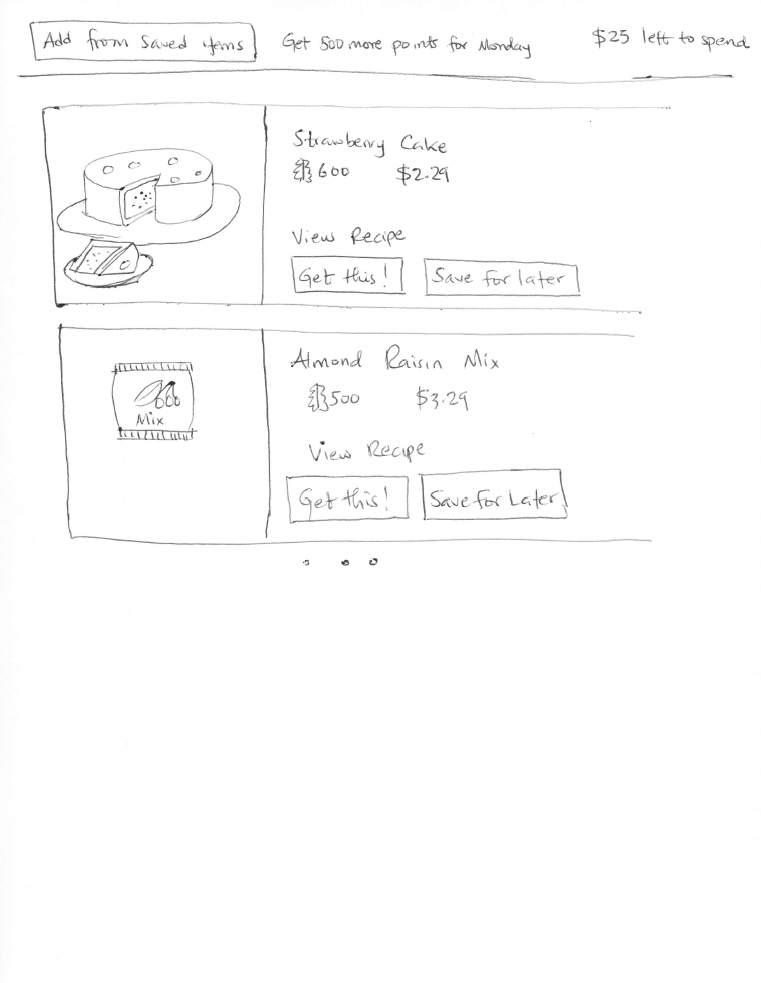 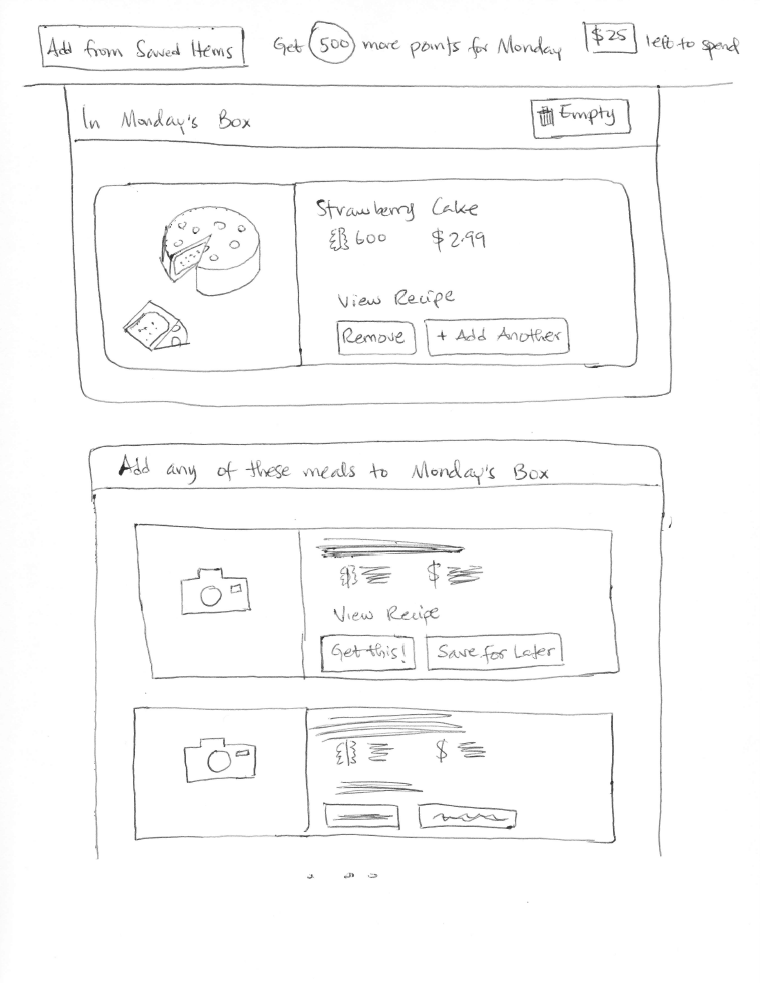 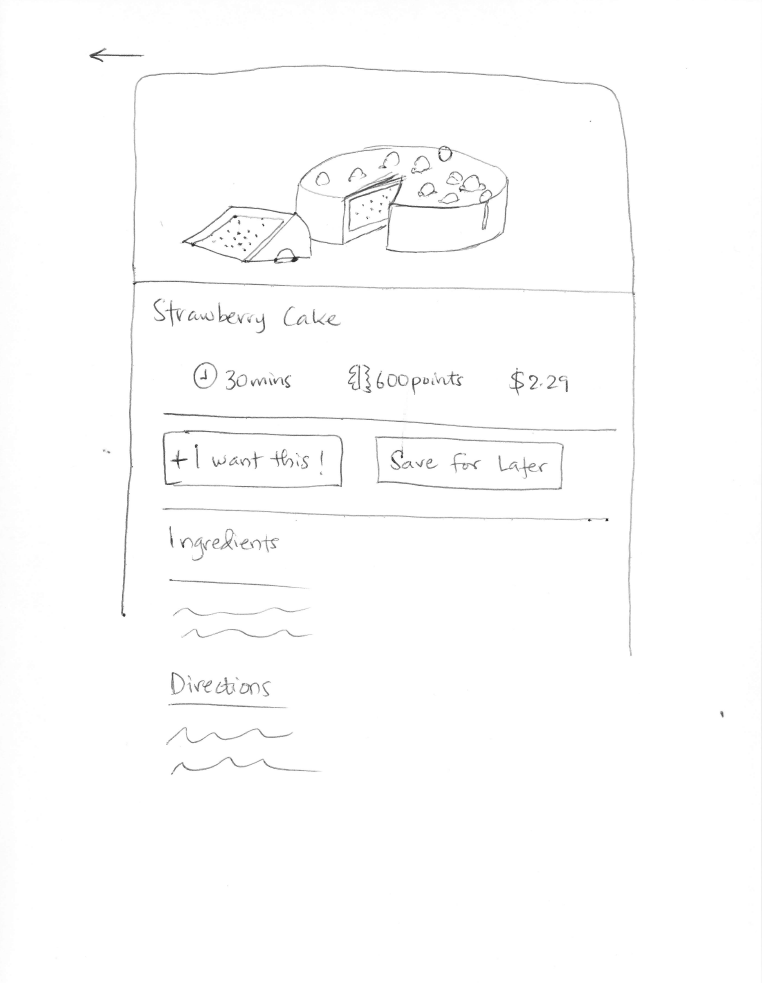 Second Round after Design Critique

Sketched out a flow based on the metaphor of going to the store to buy ingredients, stocking one's pantry with those ingredients, and getting suggestions on what meals could be created from them. 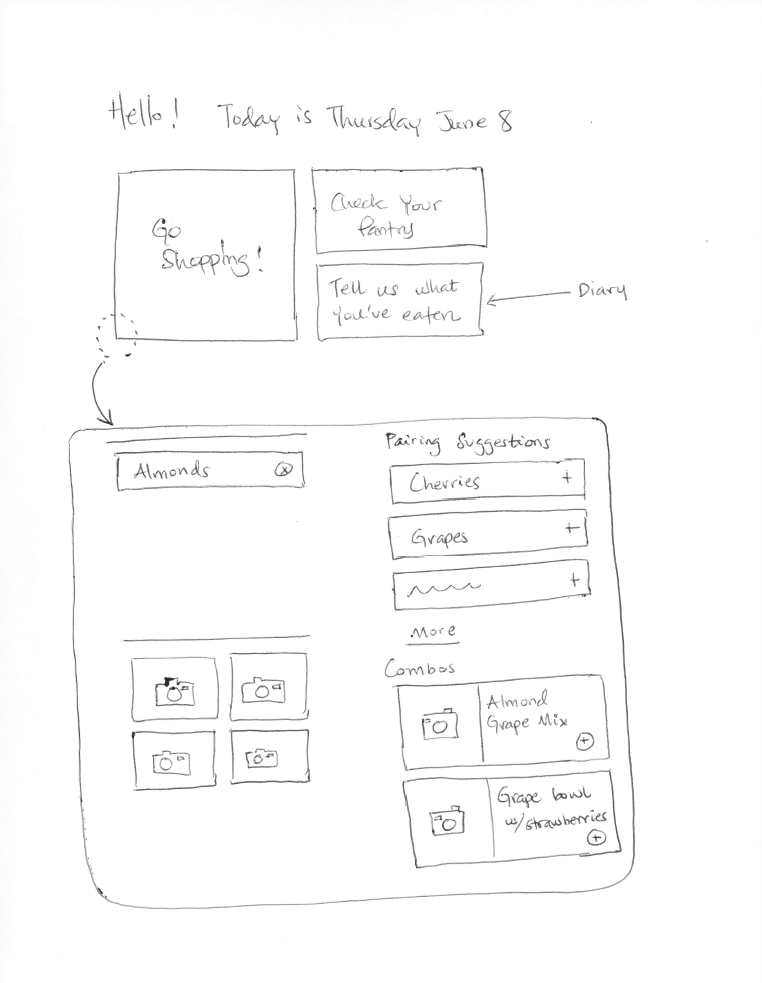 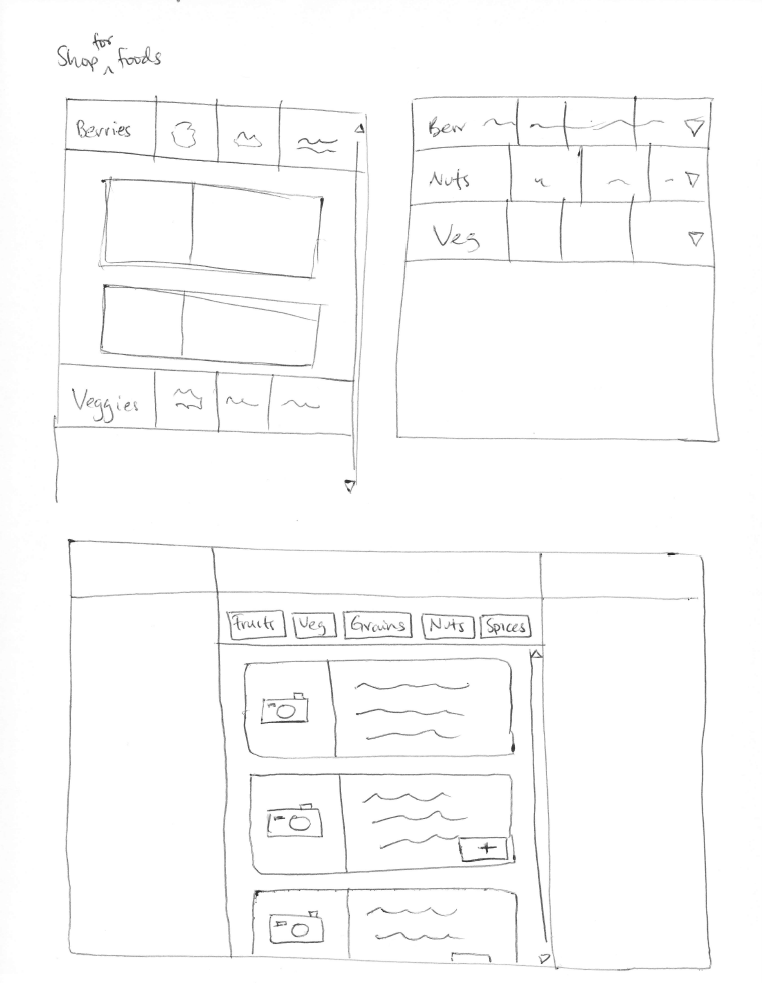 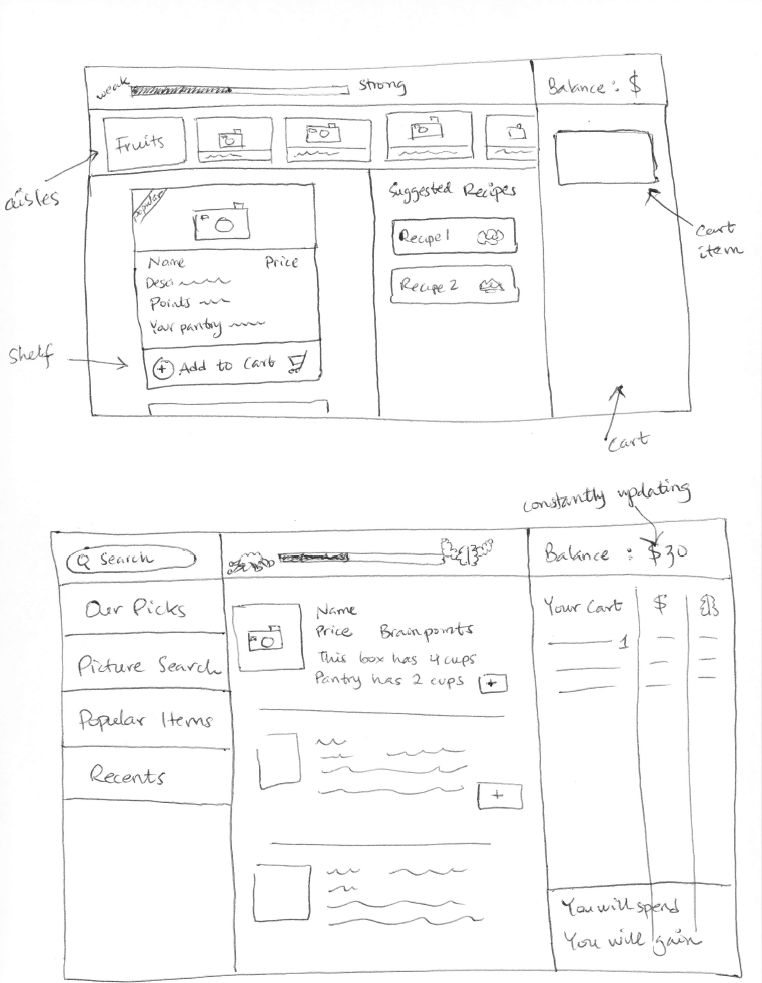 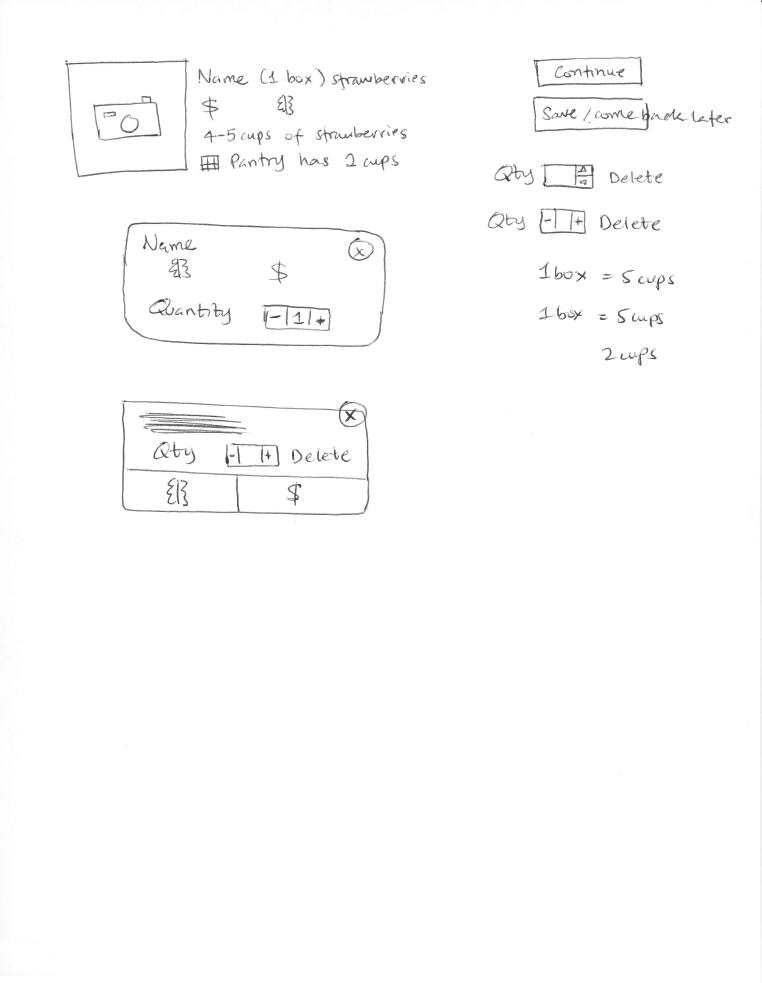 Low fidelity prototyping with Balsamiq to capture the interactions, get a concrete sense of the flows, and get more critique. 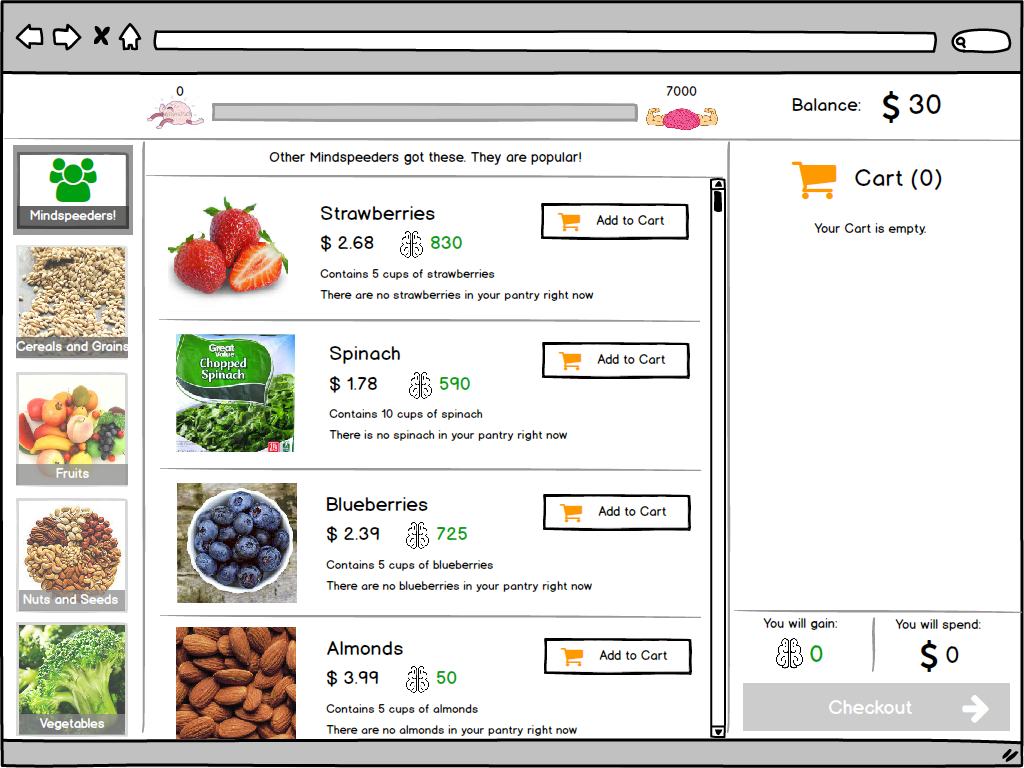 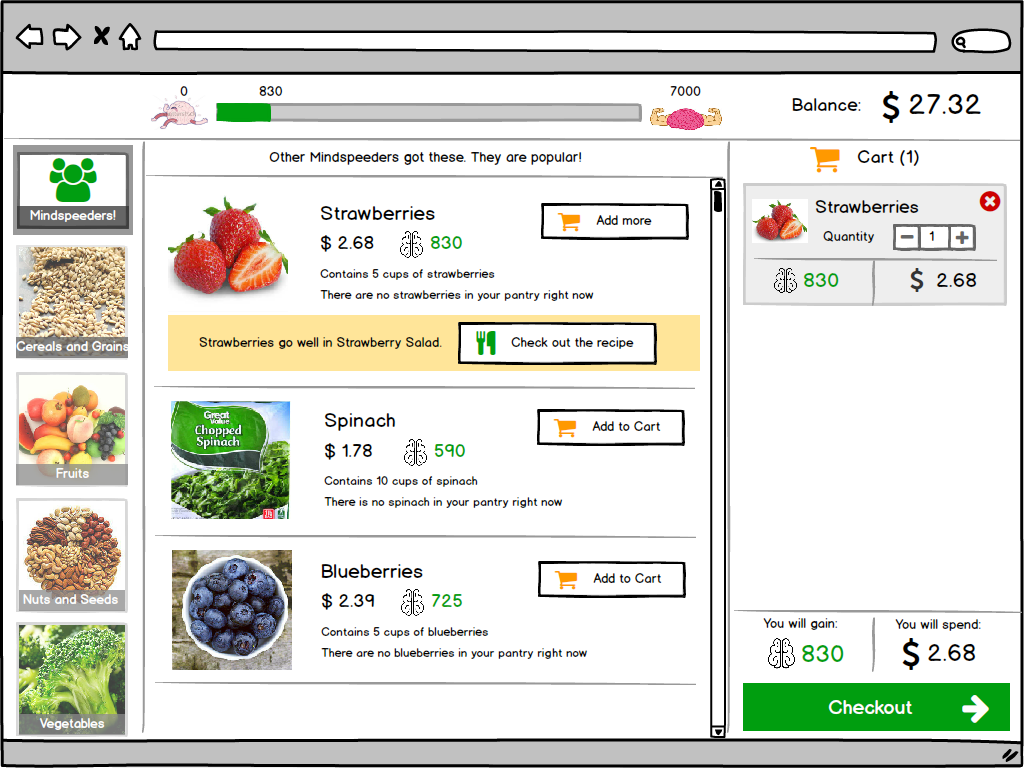 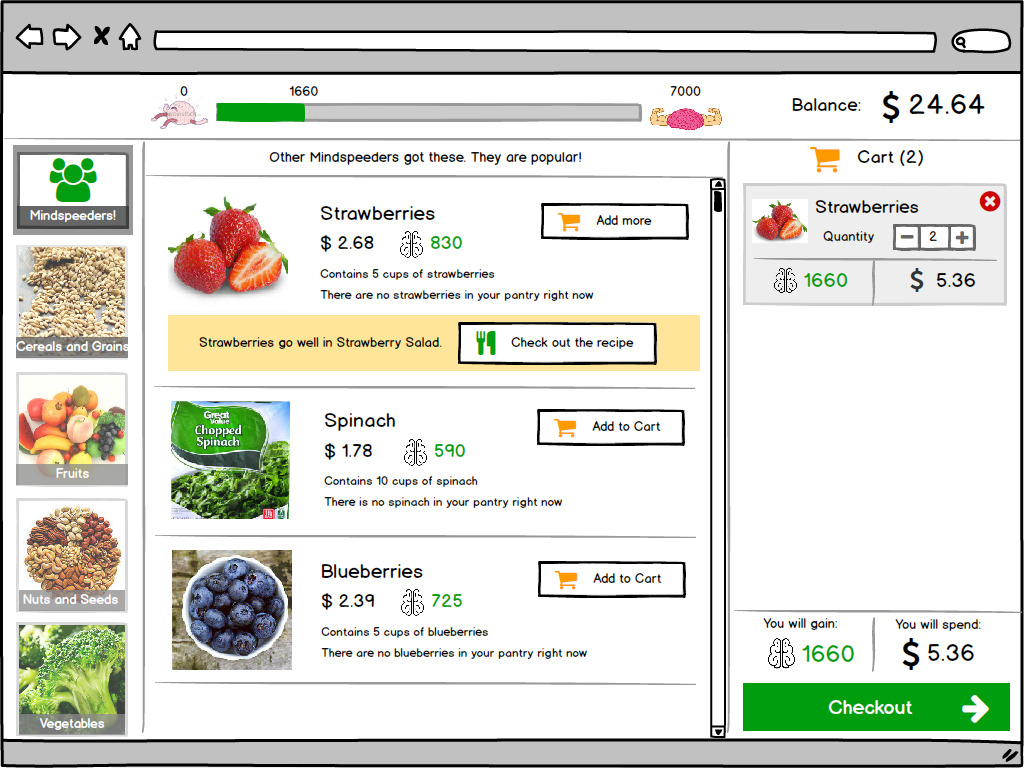 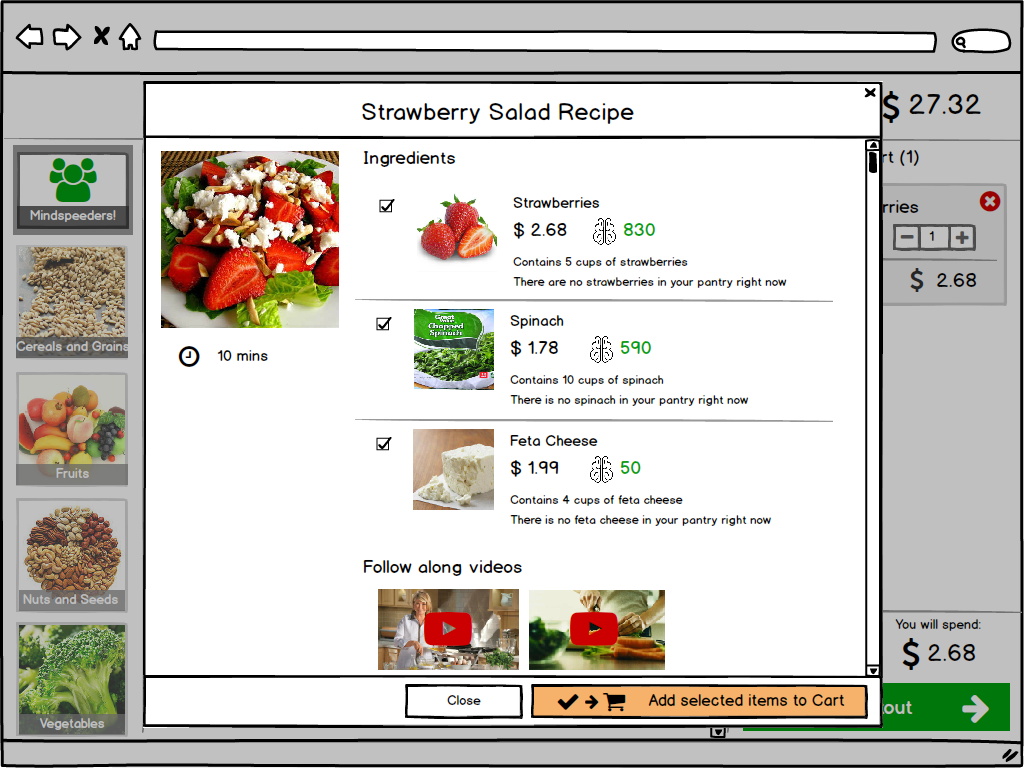 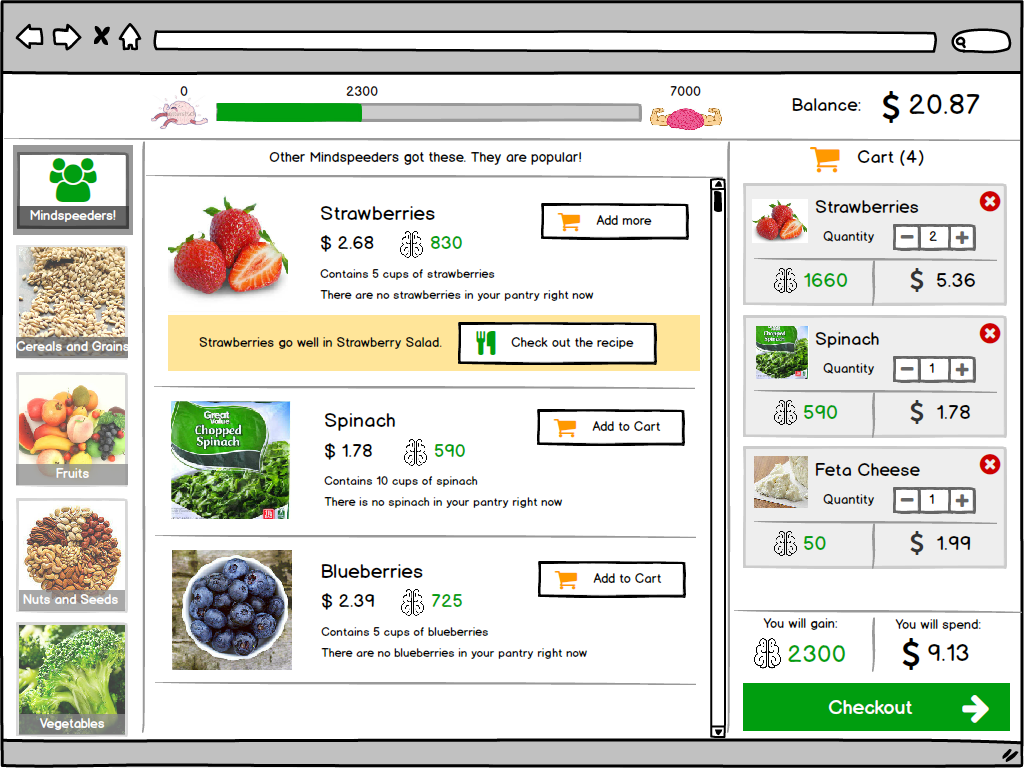 Created an interactive high fidelity prototype with Sketch and Marvel for user testing. 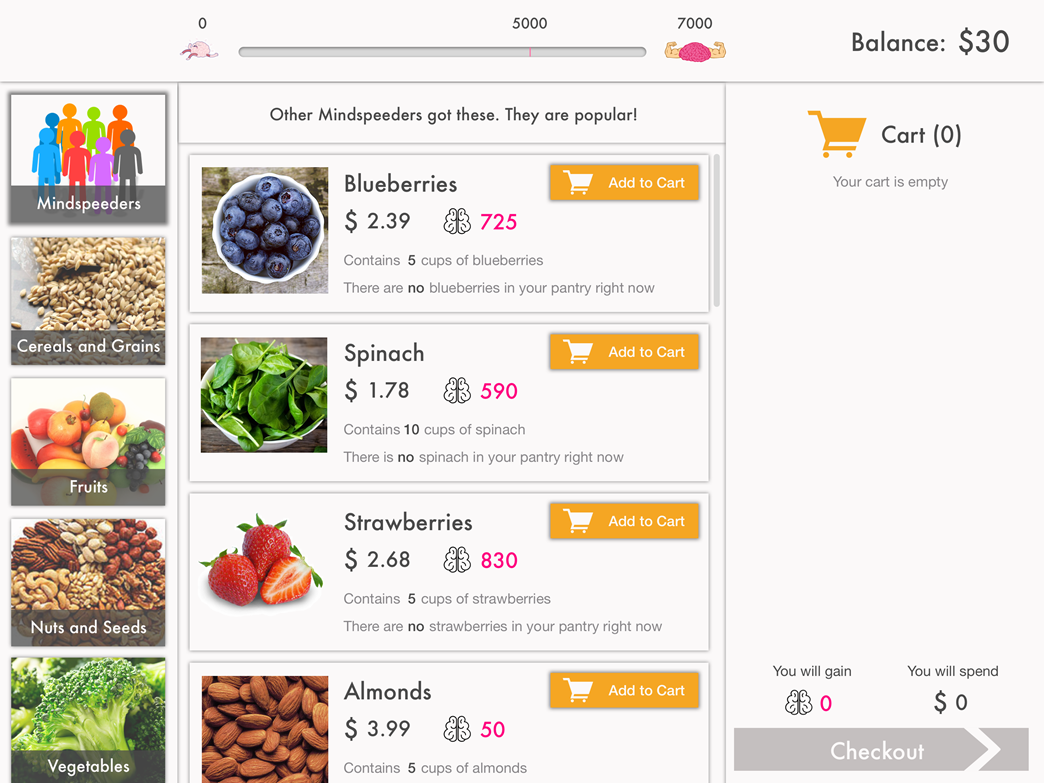 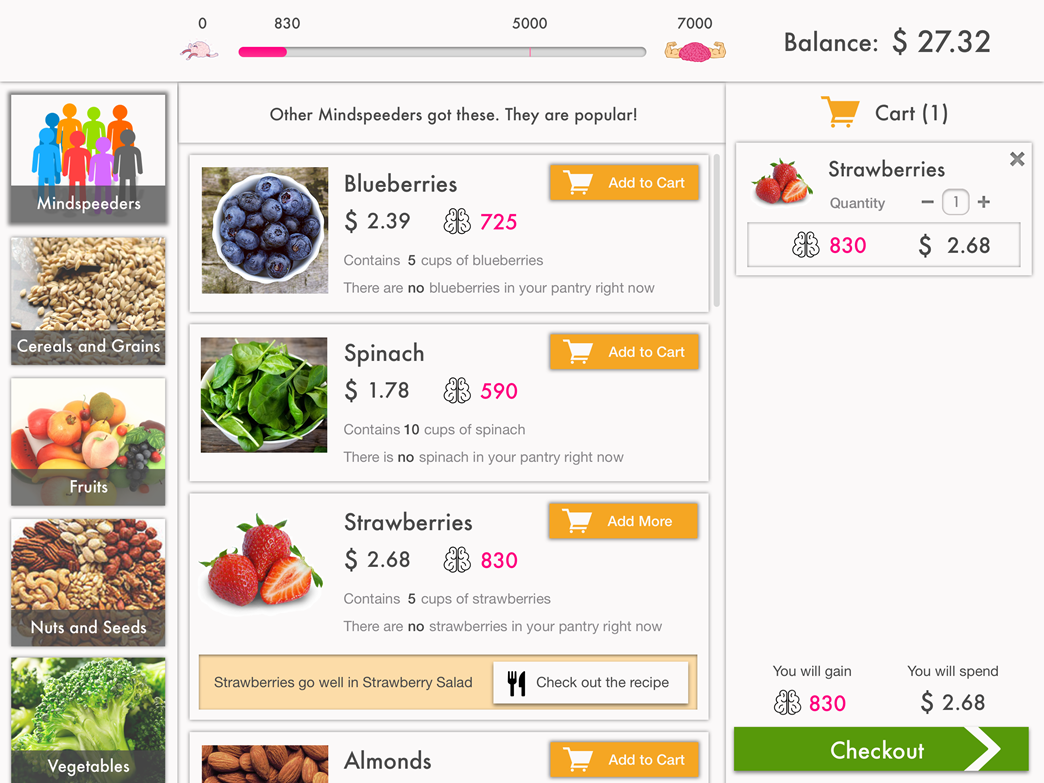 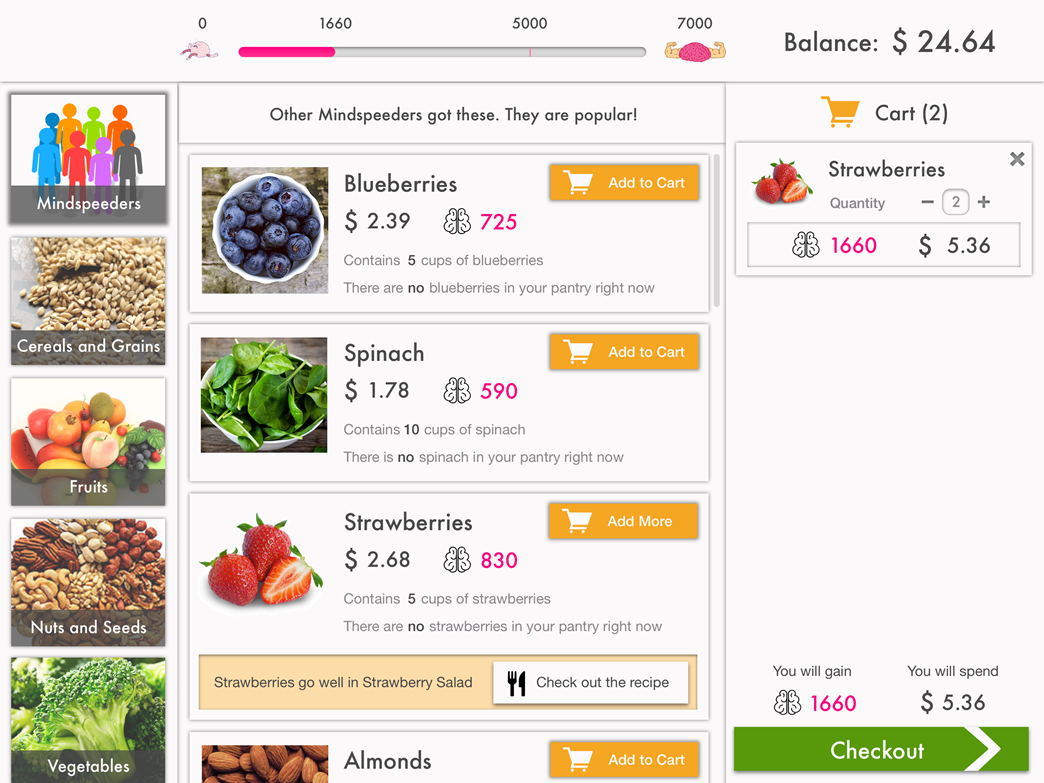 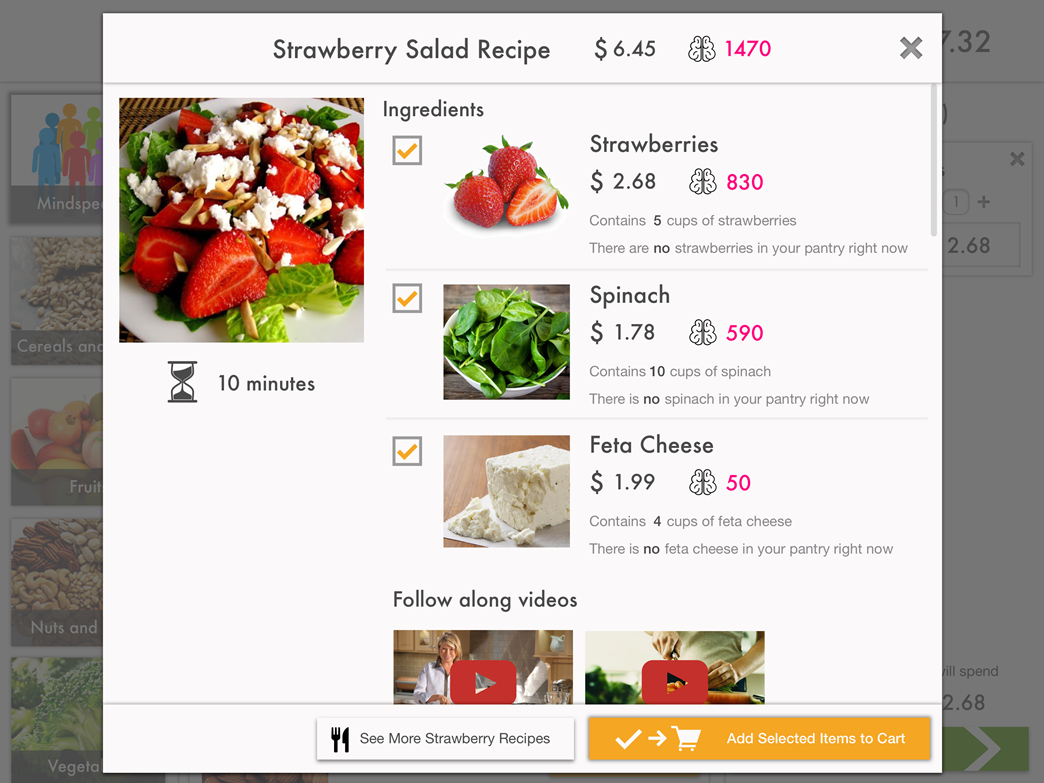 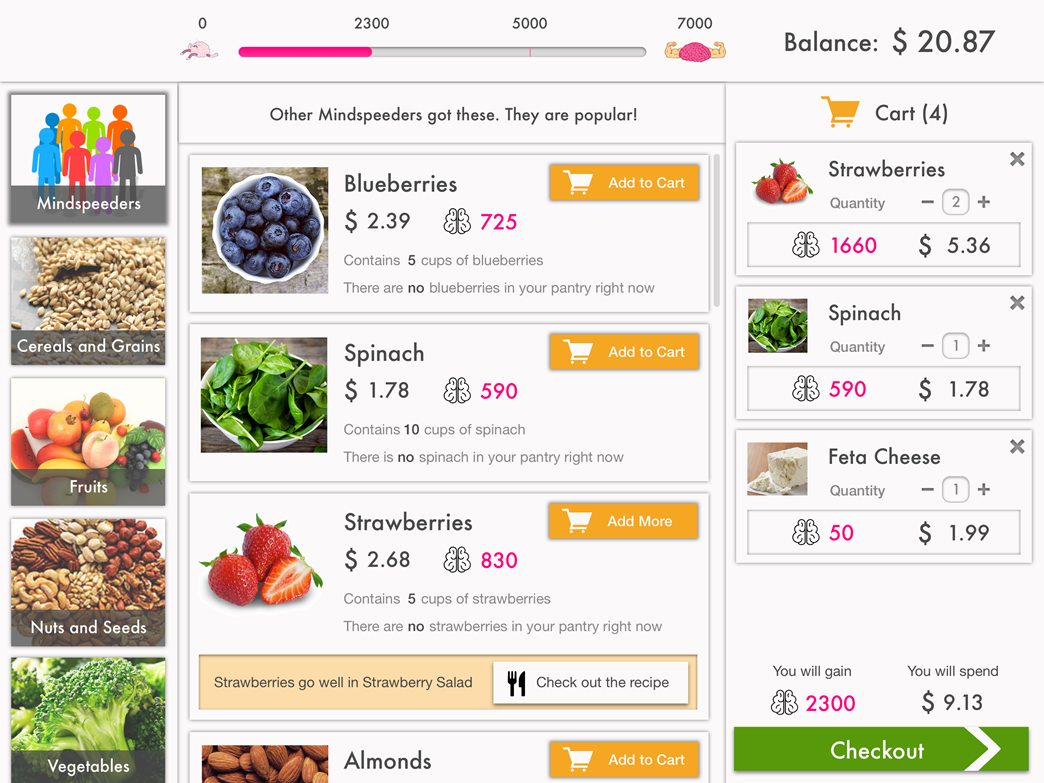 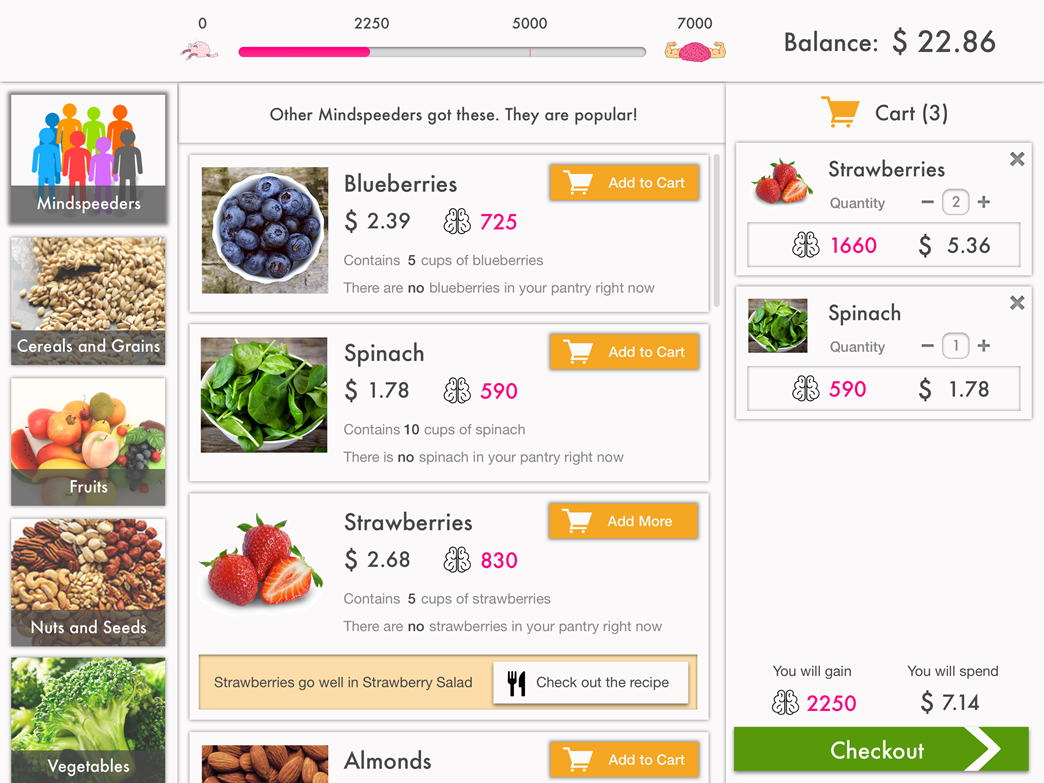 The prototype was tested with eight participants who were able to complete the tasks we assigned, but we found several aspects of the design that needed rethinking due to the facts that:

Based on what we learned from the testing sessions, the team came up with an improved design that removed the complexity of previous designs, preserved the user's ability to make informed choices, and incentivized healthy eating.

Users can build a seven-meal order by adding choices to their cart. 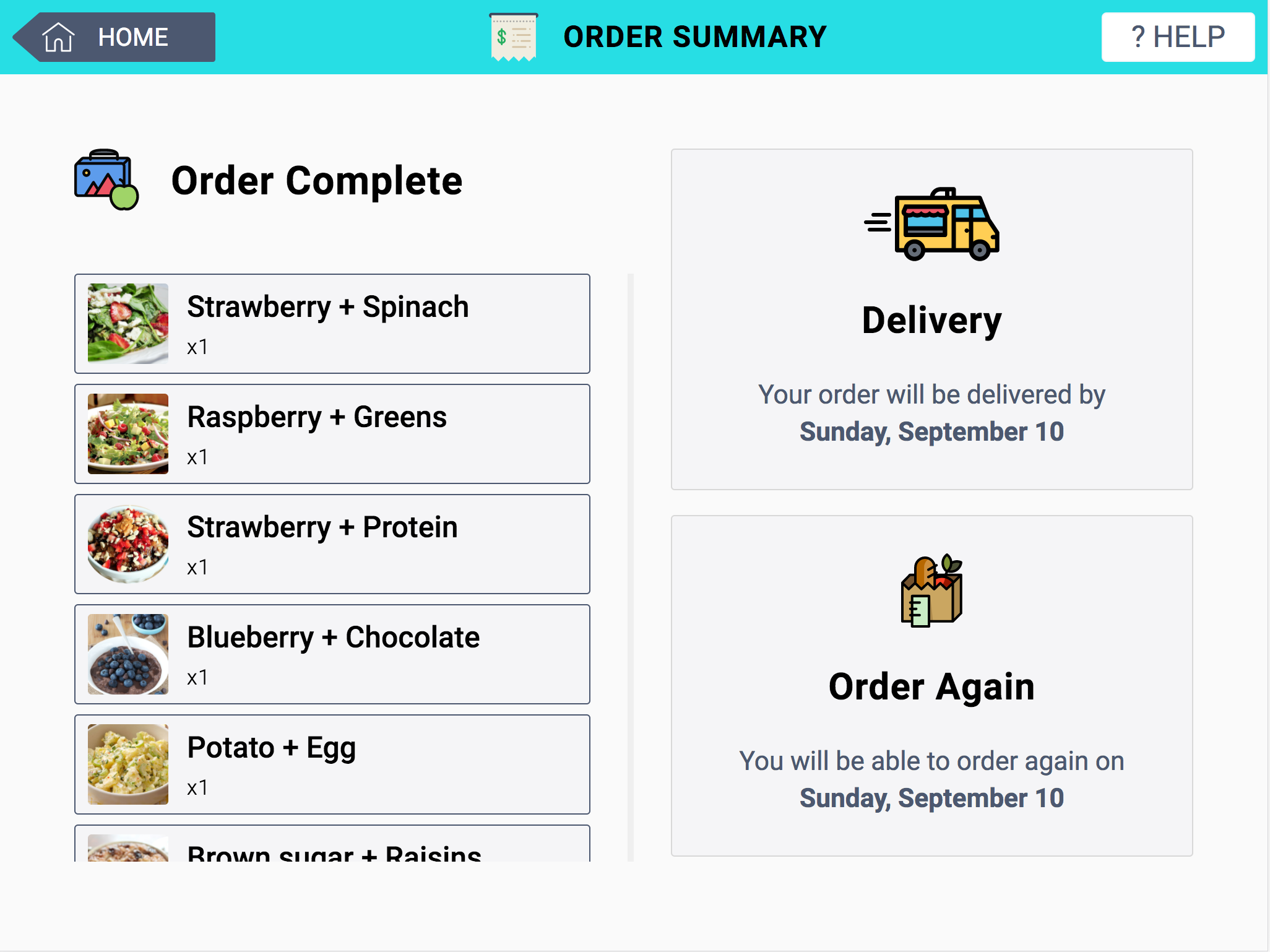 Each day users report what they ate, they get a small incentive.

To further refine the application, the team intends to conduct some think-alouds with potential users. We are also planning to conduct taste tests to find out which of our meals people find palatable. Beyond these will come the real test when participants start using MINDSpeed to order the meals that they will eat everyday while part of their three month stint in the four year MINDSpeed research study.

Check out some of my other projects

Improving and easing the process of signing up volunteers

Making the online car shopping process a breeze, one answered question at a time

Back to Projects To Top